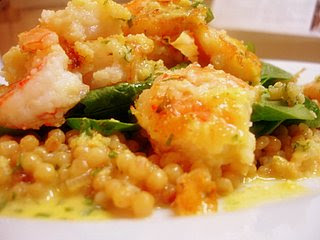 Last week AMC had a Forrest Gump marathon, and I’ll admit, I got caught up in it more than once. One of my favorite parts of the movie is when Bubba is explaining to Forrest all the ways you can prepare shrimp. It totally cracks me up no matter how many times I’ve seen it.

Naturally, Bubba’s talk left me hankering after the little crustaceans. I always keep some in the freezer, so that wasn’t a problem. Finding a recipe wasn’t difficult either, because there was a special one I’d been holding on to for a while now. Alana, one of my readers, shared this with me a few months ago, saying it was one of her favorites and she thought I might enjoy.

The original concept was a Cooking Light recipe, but another blogger had adapted it a bit and that’s the version Alana used with just a couple of small changes of her own. After reading over both versions, I took parts of each, including Alana’s idea to make extra sauce, and this new version was born. It’s a dish full of bright flavors- a perfect way to shed the winter and enter into spring!

To prepare sauce, bring orange juice to a boil in a small saucepan. Let it boil until reduced to 1/2 cup (approx 15-20 minutes), then remove from heat. Let cool (the juice should be thick), then whisk the rest of the sauce ingredients in. Cover and set aside.

Heat olive oil over med-high heat in a large pan with lid. Add shallots and stir to coat, then add couscous. Stir the couscous in the hot oil, toasting the pearls evenly. Once the couscous is golden brown, add all of the heated chicken stock. Stir once, cover with the lid, and simmer on low for 15-18 minutes.

Reheat the sauce over low heat. (Do not allow to boil, it just needs to be warm)

Combine shrimp and lightly beaten egg white in a bowl, tossing thoroughly to coat. Combine the breadcrumbs, remaining ginger, cilantro, and black pepper in a large bowl with lid. Shake to combine. Using a slotted spoon, add shrimp to bowl. Reseal the bowl and give a good shake to completely coat the shrimp.

Heat canola oil in a large nonstick skillet over medium-high heat; arrange shrimp in a single layer in pan. Cook 2 minutes on each side or until done.

Place 3/4 cup couscous on each of 4 plates, then pile 1/4 of the raw baby spinach on top of the couscous. Using a flexible spatula (so you don't tear the crust), pile shrimp on top of the spinach. Drizzle sauce over the whole dish, adjusting amount to your taste.