Martin’s Bar-B-Que: The One I Forgot 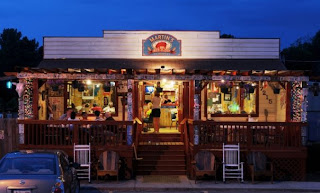 The week after I posted my “Best of 2009” list, it hit me that I left off something very, very important. I’ve been kicking myself ever since for letting it slip my mind, and I blame it on my lack of photographic documentation. This something I speak of is Martin’s Bar-B-Que Joint out in Nolensville. Even though I’ve never snapped pics of the food I’ve enjoyed there, please don’t let that lead you to believe it’s because it wasn’t worthy. It was more than worthy.

I’ll be honest, I heard about this place quite a long time ago, but never felt the need to jump in my car and drive the 30 minutes it would take for me to get there. I mean, it’s barbecue. There are at least five BBQ joints within 10 minutes of my house and I don’t even bother going to them. Why would I drive 30? But as time passed, I continued to hear more and more talk of this phenomenal ‘cue, and my curiosity grew. Then last summer, Bon Appetit magazine named Martin’s one of the Top 10 New Barbecue Restaurants and I knew I could hold out no longer. It was time to take a drive.

Once I tasted Pat Martin’s dry rub rubs and smoked chicken wings with white sauce, I was hooked. Hooked. The girl that was at first unwilling to drive 30 minutes to and fro to eat BBQ now doesn’t think twice about it. If you live out that way and haven’t eaten at Martin’s yet, you’re nuts. Just plain nuts. Seriously crazy. I’m not kidding around about this. I would eat it at least once a week if I lived nearby. (and I would probably go up 2 sizes)

For those of you that are not fortunate enough to be in close proximity to Martin’s, I say to you: take a drive. Except not today. Or tomorrow. But soon.

Because I do have a little bad news if you aren’t already aware- they’re currently closed to build a bigger, better restaurant. It has been closed for three months and it’s killing me. I really need some.

And it’s not just killing me and their other die-hard fans. I think it’s about to kill them too….
I’ve been following the construction progress via Facebook and Twitter, and they just can’t seem to catch a break. Everywhere they turn they’ve had one more setback or delay.
But the last date announced for the grand opening is Tuesday, March 2nd, so I’m keeping my fingers crossed it’ll actually happen and I’ll be chowing on some wings within the next couple of weeks.

And here’s a little tip for you- become a follower of @martinsbbq on Twitter, or a a fan on Facebook, and you just might get invited to a party. Check out this tweet straight from @martinsbbq:

Even if you don’t care about the pre-parties, don’t use Twitter or Facebook, you should still make that drive out to Nolensville some time soon to sample the best barbecue I’ve ever eaten. You heard me: The Best.