Seems like this is turning into “Ode to Jason McConnell” week. Monday I told you about his guacamole, and now I’m spreading the word about his newest undertaking: 55 South – a southern comfort food restaurant that just opened last week in downtown Franklin.

If you’ve been to Sol before, then you won’t have trouble finding this new eatery, because it’s in the exact same spot. Never fear, Sol is still there too, but just downsized a bit to share the space with Jason’s newest venture. Now there are 2 intimate dining rooms under one roof–with 55 South facing Main Street and Sol facing 4th Avenue.

While we’re talking location, you might be wondering where the name 55 South came from if not the actual address of the place. Well, it refers to the highway that connects Memphis and New Orleans, and the menu most definitely reflects those 2 locales.

Yesterday I had the pleasure of lunching with a fellow food lover, Chris Chamberlain (aka CeeElCee) at this new soon-to-be hot spot. Here’s a rundown of what we sampled: 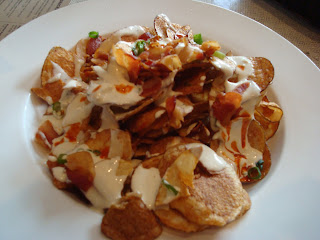 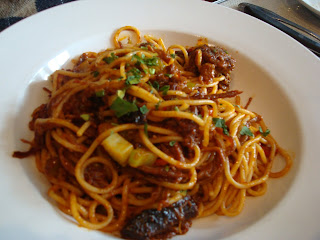 I had never even heard of such a thing, but Chris said it was one of his favorite dishes at Interstate BBQ in Memphis. He shared a couple of nibbles with me, and I have to say- I will be ordering this in the future! Sounds strange, but I promise, it was delicious.
NOLA BBQ Shrimp
New Orleans classic style over blue cheese grits 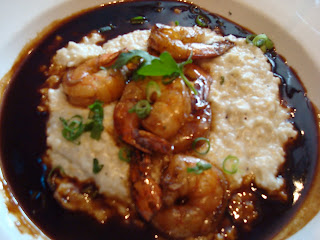 I can never resist shrimp & grits, and you know how I love blue cheese!

As we were finishing up our meal, food was delivered to the table next to us, so I had to sneak a peek. Okay, not exactly a peek- it was a blatant stare.

Their Shrimp Po Boy was HUGE, and I could see that it was chock full of big, plump shrimp. This was no skimpy portion. The arrival of this dish at our neighbor’s table spurred us into a discussion about “authentic” Po Boys and how bread is key. I’m no Po Boy connoisseur, but one of my co-workers grew up in southern Mississippi and has eaten more than his fair share, so I consider him to be one. On more than one occasion, he’s stressed the importance of the bread and described to me exactly how it should taste and feel. This is serious stuff.

So naturally we inquired about the bread with our server, and she in turn sent the chef out to talk to us. Turns out they use real, authentic Gambino’s straight from New Orleans for this sandwich – nothing else would do. Impressive.

I’ll be taking my co-worker here very, very soon to get his opinion of the Po Boy and to try some other things on the menu myself. The fried green tomatoes with gulf shrimp remoulade sounds divine, and our server said the Delta Tamales had been a hit with the crowds so far. And I can see why -a beef tamale topped with chile rojo & crema- yes please!
55 South
403 Main Street
Franklin, TN 37064
http://eat55.com/

P.S. Please forgive the slightly blurry photos. Some how, some way, I’ve gotten my little point and shoot stuck in a mode that won’t focus or flash.

7 comments on “55 South Opens in Franklin”