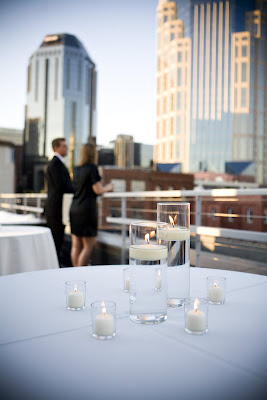 As they say, location is everything, and in the case of our wedding it was no different. The space would set the mood for the evening, and considering we didn’t want the typical wedding, we needed something unique. Something unlike anything we’d ever personally experienced in our many years of attending and being a part of weddings.

As I mentioned earlier in the week, our caterer gets all the credit for finding our hidden gem, Aerial. As soon as the elevator doors opened, I was sold. Literally. One of the requirements during our hunt was some type of outdoor patio space, and not only did this have an outdoor area–but it was a rooftop with sweeping views of The Ryman, the Broadway honky tonks, the bat building, the symphony, and the bridges crossing the river. Nothing could beat this space.

I realize it isn’t perfect for all weddings- but it fit the urban chic theme I was going for to a T. The layout easily morphed from ceremony to reception in a blink of an eye, which was important to me. I didn’t want any down time between sealing the deal and starting the party!

I think you get the point that the “look” of the venue is awesome, but I must make sure to note that the service was incredible as well. All of the staff members were so incredibly nice and accommodating, even going way beyond the norm to make sure that we were happy. You see, we had a slight mishap with the transportation service we hired to pick up our families and out of town guests at Hotel Indigo. Without going into the full dramatic details, suffice it to say that they screwed up big time and our guests were stranded with the ceremony set to begin in just minutes. Max, one of the Aerial owners, came to the rescue. He grabbed his doorman and together the two of them took their own SUVs to the hotel and transported our guests to Aerial. How’s that for service?

It goes without saying (but I’ll say it anyway) that I wholeheartedly recommend Aerial for any sort of event you may be planning. Corporate events, birthday parties, anniversary parties, rehearsal dinners, receptions, baby showers- you name it. You might recall that they recently hosted the Bacon Takedown when it came to town. Sadly I couldn’t attend, but I heard it was a lot of porkalicious fun. (Click here for the full report and some pics)

Yep, that’s The Ryman in the background. What better backdrop for a Nashville wedding?

The Schermerhorn Symphony Center all aglow

Recently I’ve gotten to know Deanna Bruton, the new Director of Sales for Aerial. We had drinks together last week at my other Nashville love, The Patterson House (that just so happens to be owned by the same folks as Aerial), and she almost had me wishing I was planning a wedding all over again as I listened to all of the fabulous things she has in mind for Aerial. Deanna is a total foodie, and for the past few years worked exclusively with Virago and Lime doing their catering. Now she’s focused on expanding Aerial’s catering options which includes working with some amazing Nashville chefs.

Her vision is to create custom menus for each client based on their personality and budget. For those that really want to go over the top, she’ll be enlisting the help of Chef Josh Habiger, one of the creative geniuses behind The Patterson House. In addition to the extra catering options they’ll be offering, she’s also working on revamping the venue and making updates to the facility as far as rental options and sound. Can I say jealous??? Those of you that are just now starting to plan will have an even more fabulous experience than I did!

Dancing on a rooftop in the middle of downtown Nashville on a perfect October night.
Can it get any better?

So there you have it. My wedding recap is complete and now I’m off to spend a fabulous anniversary weekend with my honey. Tonight we’ll be heading to The Ryman to see Snow Patrol. Did I mention that I walked down the aisle to Snow Patrol’s “Chasing Cars”? Pretty nice coincidence that a year later I’ll be listening to them in person right across the street from where I said “I do”.

P.S. For more info on our other vendors and details, check out the feature on ashleysbrideguide.com