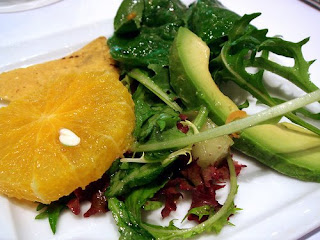 Greetings from beautiful Minneapolis, the City of Lakes! Ah, but of course I won’t actually see any of those lakes while I’m here because this is business travel. I’ll probably spend a majority of my time in a windowless room watching slideshows- yawn.

Oh, who am I kidding? This trip is not all work and no play. Hello. This is me we’re talking about- a good time will be had. Reason being? My friend Stephanie moved here a few months ago, so now when my job brings me to the Twin Cities, we get to hang like old times!

It just so happens that tomorrow is Stephanie’s birthday, so we’ll be celebrating together tonight with drinks at Bradstreet Crafthouse (suggested by Toby Maloney of the Patterson House) followed by dinner at 112 Eatery. And yes, of course I’ll be telling you all about it!

But for today, in honor of Stephanie’s birthday, I’m sharing with you a salad recipe that she loves. Truth be told it’s the dressing that she became a bit obsessed with for a while. And rightly so, this stuff is good.

Toss together first 4 ingredients in a large bowl. Serve immediately with Cilantro-Lime Vinaigrette. 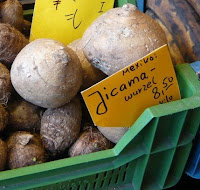 *Jicama (pronounced HEE-kah-mah) is a crispy, sweet edible root whose texture resembles raw potato or pear. Raw jicama tastes similar to a pear or apple and contains a high amount of vitamin C, is low in sodium, and has no fat. Cut up into squares, it enhances fresh fruit salad, absorbing and reflecting surrounding flavors. If your local store doesn’t carry jicama, you can substitute apple for the same crunch/texture.

Photo Credit: 03b avocado and orange salad by bewarenerd
jicama by WordRidden