Butter and Bacon and Chocolate, Oh My!

My love affair with Zola began several years ago with a bite of shrimp risotto that I will never forget as long as I live. When someone asks me for a Nashville restaurant recommendation, those 4 letters roll right off my tongue. It’s not a place I go to be entertained, to hang at the bar (there isn’t one), or to marvel at the decor. I go for the food, plain and simple. 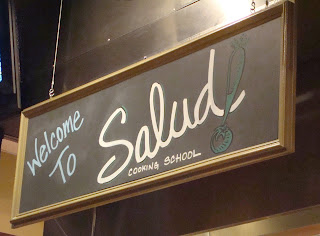 A while back I was perusing the class schedule of our local Whole Foods’ cooking school, Salud, and out pops Deb Paquette‘s name. Deep breath. Could this really be true? The genius chef of my favorite restaurant is teaching a class just 5 minutes from my house and it only costs $35??? I immediately recruit friends to sign up for the class with me, and then I call to make the reservation, right? Wrong. I put it off until a week before the class and then call. Stupid, stupid me. Of course it’s totally sold out. Why wouldn’t it be? She’s a genius, and I’m not the only one that knows it. So my name goes on a waiting list in case of a cancellation, but I figure my odds of getting that lucky are about as likely as me winning American Idol. (as hubby says, alien life forms would be scared back to their planet if they even heard my humming)

But what do you know? Day Of, 3 hours before the scheduled class time, I get THE CALL! Hi Beth, this is Merijoy at Salud and we’ve had a cancellation and wanted to see…..Yes, Yes, Yes, omg, Yes! Off to Salud we go. Deb is wacky and funny and kind of all over the place, and I love her even more now that I’ve seen her up close in action. Her personality spills over into her food making it exotic and unusual with all sorts of flavor combinations that most of us would never dream of attempting. White chocolate in slaw? 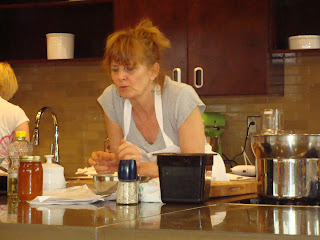 Deb plowed through lists of ingredients, some of which sounded beyond bizarre, but in the end, came together perfectly in each dish she created. Here’s a rundown of the spread:

Pulled Pork on Sweet Potato Biscuit with peach butter, mole sauce and a sprinkling of toasted peanuts served alongside Cocoa Slaw (white chocolate in it!) and candied bell peppers 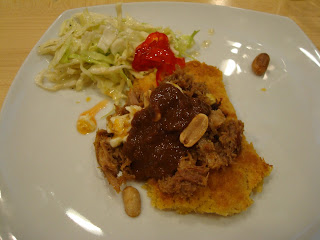 This pork on sweet potato biscuit was the best dish of the evening. Deb thinks she made a mistake by adding too much butter to the biscuits, causing them not to rise properly, but we think they turned out even better than if they had been fluffy. Bring on the butter! 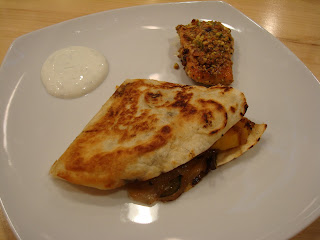 Okay Rebecca, time for your 2 cents. Was it as good as I remember, or did she just cast a spell on me? Because I’m thinking that was probably one of the best $35 meals I’ve ever consumed!

Everyone be sure to check out Salud’s just-released summer schedule to see what inspires you! The Wine and Food Pairing Class that Deb will be teaching in August has my name written all over it. Who wants to join me?

10 comments on “Butter and Bacon and Chocolate, Oh My!”