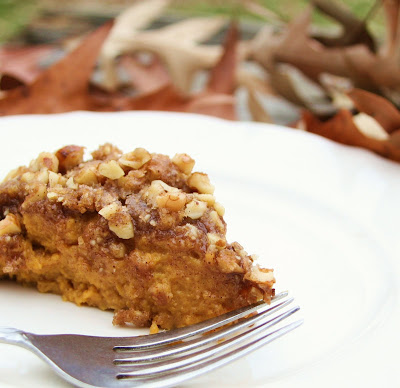 Remember Alana, the winner of the Cooking Light subscription giveaway? She had my mouth watering with her favorite holiday food comments, one of which was her mom’s Walnut Pumpkin Pie. I begged for the recipe, and she was kind enough to send it to me, so I figured- what better time to test it out than Thanksgiving?

It garnered raves from the whole family, particularly my brother-in-law (loved it!), as well as my hubby. This is quite a surprise given the fact that when Ravi asked what I was baking he wasn’t exactly excited, as he’s not a fan of pumpkin pie. He’s usually a good sport though and tries my dishes, even if he doesn’t think he’ll like them. I promised him it was much, much better than a typical pumpkin pie.

Actually, Ravi dubbed Alana’s version with its nutty, crumbly, topping and graham cracker crust THE BEST pumpkin pie he’d ever tasted, and I would have to agree!

1/2 tsp each ginger, nutmeg and salt

Reduce oven temperature to 350. In a small bowl, combine brown sugar, flour, and 1/2 teaspoon cinnamon. Cut butter in until crumbly. Stir in walnuts. Sprinkle all over top of pie.