.
It goes without saying that Hong Kong is quite different than Nashville. They drive on the opposite side of the road, there are 7 million people within a fairly small space (& 95% of those people are Chinese) and there are lots of foods I’ve never seen before. But for the most part, I didn’t feel completely out of place. Mainly because there are plenty of other people wondering around that don’t look so different than me, signage is in English, and most of the hotel staff speak at least some English.
You could say I had a fairly smooth transition in my first 24 hours. Then I boarded a plane to Wenzhou, China. For the next 8 days I was in another world –sights, sounds, experiences and flavors that I won’t soon forget.

I don’t have time right now to explain all of it, so I’ll just focus on the food-related experiences because that’s what most of you are here for anyway!

Words cannot adequately describe what I felt upon entering my first restaurant in Wenzhou. I had never seen anything like it. Anything. The long room was filled with rows and rows of plated food on display, fish tanks with live fish, squid, snails and eels, and a dozen restaurant staff members that were watching my every move. Not knowing where to begin or what to do, with no less than 15 sets of eyes upon me, it was all a bit disconcerting to say the least.

Our hosts for the evening were two of our factory contacts, one of whom spoke no English (a sign of my week ahead) and the other that spoke very little. Samuel and Eric did their best to explain the foods to me, but since they didn’t know the English word for many items and most foods were so completely foreign to me, I eventually just gave up and let them choose everything.

And this is how it works: a member of the staff follows you around with a notepad, marking down your choices as you peruse all of the items on display. That includes your own, very fresh, very live, seafood. Then you are led to a private dining room where your will be fed between 10-15 (!) dishes. I really don’t know how these people stay so thin. Every day I’ve been here this has been our lunch and dinner routine and I am now pleasantly plump.

Factory contact, me, and Samuel at our dining table, complete with “lazy susan” (as is standard)

Our menu at Cagnan Hotel in Wenzhou:
Beans
Boiled Peanuts
Lychee
Sweet Potatoes (pictured below. yes, purple!)
BBQ Eel
Rice Patty with brown sugar (I really have no idea what this was or even how to describe it. See yellow discs on the table above)
Soft Shell Crab in Rice Wine
Bok Choy
Spicy Beef with Bean Sprouts

And last, but certainly not least, Raw Sea Cucumber (suprisingly one of the highlights of the entire trip). Served chilled, it had a chewy texture that I found delightful. The flavors of rice wine, wasabi and ginger in the soupy mixture were delicious.

Have you seen a sea cucumber before? Not exactly what I would call appetizing: 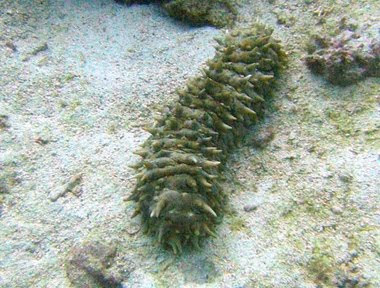 Actually it’s downright gross looking and if I had been asked if it’s something I wanted to try, I would have politely declined. This goes to show that looks can truly be deceiving!

Some other highlights of Wenzhou were my breakfast discovery of warm soybean milk, unlike any soy milk I’ve tried before, and “Dragon Eyes“, the Longan fruit. So very sweet and juicy, I wish I could transport some back to Nashville with me.

Oh, and I also tried pig ear and pig tail for lunch, but I can’t say those were really highlights!

4 comments on “Another World”