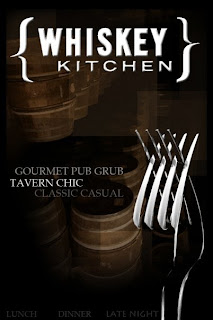 If you’re out on the “scene” in Nashville very often, chances are you’ve spent some time in at least one of Chris Hyndman’s hot spots. Maybe you’ve munched sushi at Virago, sipped a jalapeno caipirinha on Lime’s patio, or danced the night away at the bygone Layl’a. Me? I’ve done all of the above, more times than I can count. So when I learned of his “M Street” plans for the Gulch, I guess you could say I was more than a little excited.

Earlier this month, the first business in the new dining district, Whiskey Kitchen, opened its doors. Since then, I’ve visited three times, but my first two visits were strictly for liquid sustenance, so I waited to blog until after I’d actually had the opportunity to try the food as well.

That said, I’m still going to talk about the cocktails first. I mean, with a name like Whiskey Kitchen, that’s the proper thing to do, right?

There’s something I need to confess. I’ve turned into somewhat of a cocktail snob. It’s very hard for me to go out to just any bar and order a drink. The mixologists at Patterson House, Rumba, and Lime have ruined me with their unique creations. Now Whiskey Kitchen joins their ranks. It’s obvious they’ve spent some time perfecting the list of libations, and that’s a very, very good thing.

First up is the Maple Manhattan, with Four Roses Bourbon and maple syrup. I’ll admit that in looking at all the offerings on the menu, I’m not sure it would have been my first choice. But sometimes things work out….On this particular evening, my husband disappeared while I talked to some friends on the patio. Before I knew it, he was back with drinks in hand. For a second I was a bit annoyed that I didn’t get to choose for myself, but when he told me that bartender extraordinaire, Austin, chose it for me, my worries disappeared. You see, Austin has spent time behind the bar at all of Chris’ ventures through the years, and he knows what I like. This time was no different. From the description you might think the drink would be too sweet (maple syrup, hello?), but I am happy to report that it’s not. It’s actually a very smooth, pleasant drink that may go down too easy. I could see myself sipping these all night long!

But what kind of a review would that be if I only tried one drink? Instead I moved on to the Amber next: Buffalo Trace Bourbon over ice with cinnamon and autumn strawberries. This was really delightful and you can definitely tell that these are REAL strawberries, not some fake syrup. Next on to the New-Fashioned: Old Forester Bourbon with peach bitters and fresh seasonal fruit. It was also quite good, but of the three, the Maple Manhattan was the favorite of night.

Of course it’s not smart to drink a bunch of cocktails without a little food in my belly, so we ordered a couple of appetizers to begin: yam fries with spicy mustard and fried green tomatoes. Both were delicious and filling, but the standout for me was the tomatoes. Three to an order, served on a bed of arugula with tangy goat cheese, they were totally full of flavor, and I could have easily made a meal out of them. But on this night I was sharing, so sadly, I only got one. Next time, the whole order will be mine!

Since the yam fries and tomatoes put a dent in our hunger, hubs and I decided to split an entrée . Much debate over the main course ended with me ordering something I thought would make him happier than it would me. Turns out, I was pretty happy too. The Carolina Rock Shrimp hit the spot and was the perfect size for sharing. 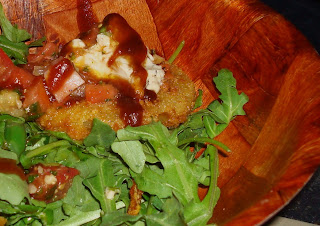 I’ve heard through the grapevine that the brick oven pizzas are really tasty, but as I’ve mentioned before, I’m not a big pizza eater. Too much bread in my belly makes for a sleepy girl, and when I’m out on the town to socialize, yawning is no good.

But there are several items on the menu that I can’t wait to try:

Southern Sliders
a basket of hot buttermilk biscuits with blackberry-peppercorn butter, peach horseradish jam and honey pecan goat cheese. Choose from: steak, grilled chicken, smoked ham or fried green tomatoes
(Okay, so maybe these are a little carb heavy too. I’ll just get them on a night when I’m ready to hit the hay early. They just sound too scrumptious to pass up!)

I have a feeling Whiskey Kitchen will be seeing me often…..