When it comes to food, I have a very short list of dislikes. For many years, slaw was at the top of that list, but not too long ago I began to realize that I shouldn’t just instinctively turn my nose up at the mention of that word.

Definition of cole slaw: a salad dish of shredded raw cabbage in a dressing.
I like cabbage and I like salad, so technically I should like cole slaw, right?

Here’s the problem- when I hear “slaw”, I immediately envision the creamy mayo-laden version. For someone that really detests mayo, that’s not a pleasant sight. You should see how my face kind of scrunches up as I type that. It’s really that unpleasant for me.

Several months ago, a commenter on the Nashville Scene Bites blog mentioned a blue cheese slaw that was always a hit at dinner parties. When I saw that the recipe had not a hint of mayo, I thought, now I can get behind some blue cheesiness. So when tasked with creating a side dish to go along with burgers and hot dogs for a weekend at the lake, I searched through the Bites archives until I found the link to this recipe. Of course, as is the case with pretty much every recipe I try – I tweaked it a bit. The end result was this creation: 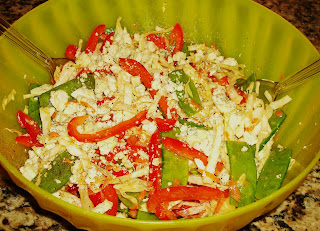 The veggies are super crunchy and the dressing is tangy, so I think it’s a perfect dish for our steamy southern summers. It caused quite a sensation at the lake house the weekend it made it’s debut, and since has made several encore appearances at our house. Blue cheese, the ingredient that initially attracted me to the recipe, has been replaced with feta in my last few preparations. Surprisingly, even being a major blue cheese lover, I think I’m digging the feta version even more. But hey, you make the call- either way, I think it will change your mind about slaw- I know it did mine!