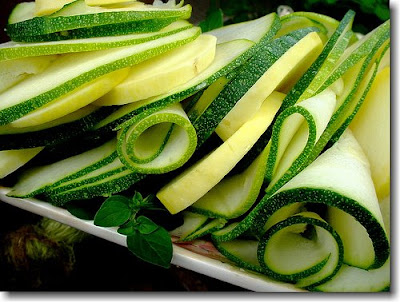 Growing up my parents always had a garden, so summers were full of fresh produce from our own backyard. Through the years I haven’t lived in many places that were conducive to planting my own patch, but that has finally changed and I now have a big backyard with potential. When spring hit this year, I launched the “my first garden” project by consulting a personal farmer about the best location to plant on our lot, the size we should start with, and plant options that would be a good fit for us. The only thing standing in our way was a fence that needed to be removed to clear the area where we would break ground. Within a couple of weeks, the fence was gone. Now the land was clear and ready for tilling.

Then the rational side of me stepped in and nipped the project in the bud. You see, this whole garden thing is not a good idea because the critters in our neighborhood are evil. Over the past couple of years when I’ve attempted to grow my own tomatoes, the squirrels quickly showed me who was boss. Not only did they devour every little green tomato that showed up on the vine, but the entire plant, down to a nub of stalk sticking out of the dirt. If I invested time and money into this project to only have those nervy city squirrels eat everything, I would not be a happy camper. So I decided the much better option for me in procuring my produce is to support our local farmers by visiting the Nashville Farmer’s Market and farm stands throughout the community.

And then of course there’s also that colleague of mine that lives out in the country with a bunch of goats and a huge garden. When he has an over-abundance of anything, he’s more than happy to share, which works out nicely for me. It just so happens that currently he has a heavy harvest of zucchini, one of my favorites. I could eat it practically every day, prepared simply by brushing with a bit of olive oil, then sprinkling with some sea salt and pepper before grilling. My hubby isn’t quite the fan of it that I am, so I’m always trying to come up with unique ways to serve it so he won’t be completely sick of it by the end of summer.

After receiving about 5 or 6 lbs of squash and zucchini from my co-worker last week, I wanted to put it all into a dish that I knew hubby would enjoy. I found this recipe a few years ago in Cooking Light magazine, and have since made it several times for friends and family and it’s always a hit. Over time I’ve modified it a bit, so that’s the version I’m sharing with you. For the original recipe just click on the Cooking Light link I’ve provided.

Combine remaining 1/2 tsp salt, remaining 1/2 tsp pepper, yogurt, milk, and egg whites in a large bowl, stirring with a whisk. Add to the squash mixture, along with the basmati rice, cheeses, parsley, and oregano, stirring well to combine. Pour mixture into a 13x9 inch baking dish coated with cooking spray.

Mix panko crumbs, garlic salt and butter in a small bowl, then sprinkle evenly over rice mixture. Bake at 375 degrees for 25 minutes or until browned on top and bubbly around edges. Let stand 10 minutes before serving.

This gratin can almost be a meal on its own, so the main dish I choose to accompany it is usually very simple – this particular evening it was grilled bbq chicken. 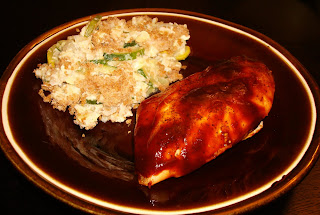 *Panko- course ground Japanese breadcrumbs that are lighter and airier than their Western counterparts and stay crisp after baking. Panko is also known for its superior browning qualities.